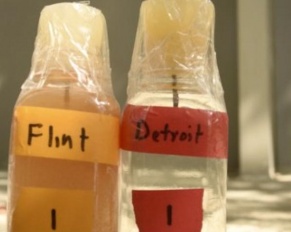 Most people never give a thought to walking over to the faucet and filling a glass with sparkling clean water.  Likewise, there is not much thought about the cleanliness of the water that you use to cook, brush your teeth, bathe in… even washing your clothes.  That is, unless you live in the city of Flint, Michigan.

By now, most U.S. residents, if not people from around the world, have heard about the plight of the people of Flint, Michigan and their water crisis.  The story has dominated the national, and even international, news for months.  The presidential candidates, particularly the Democratic candidates, have publicized the story, visited Flint multiple times and requested Flint be the host city for a CNN candidate debate on March 6th so the focus of the media would be on Flint.  Many people in Flint, as well as other cities and states, felt it was wrong to politicize their dilemma, but really – how can you not react after hearing that as a result of Flint’s contaminated water there have been 6,000 to 12,000 non-fatal injuries, and most assuredly, there will be more down the road.